So your family finds itself with a three-day weekend coming up. You want to do something fun, but also feel like you should, you know, actually appreciate the significance of what the Memorial Day holiday really entails. Well, why not do both?

Our country's National Park Service operates 29 National Memorials in locations all around our great land, many of which are not only near you, but near the kind of attractions the whole family can enjoy. Today we'll take a look at five of these locations simply as a way to get your creative juices flowing. By no means do we intend to be exhaustive, nor does our exclusion of other memorials, historical sites, battlefields or cemeteries mean they aren't equally worthy of a visit! Our goal here is to help you consider what's nearby, what you want to "memorialize" this year, what lessons might be learned at each stop, and how else you might combine fun and reflection as a family!

Let's journey from west to east today, and begin our tour in California... 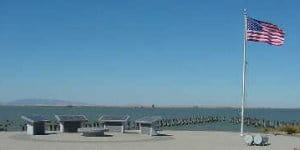 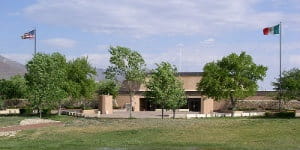 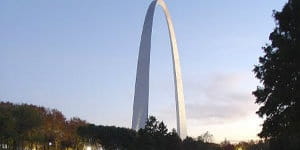 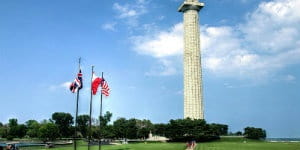 THE NATIONAL WORLD WAR II MEMORIAL (pictured) and SO many others (Washington, D.C.) 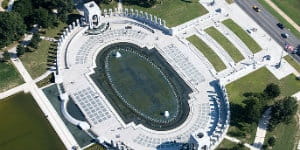 In D.C., you basically have your pick. I live 100 miles away and have visited several times, and the only memorials I've managed to see properly are World War II (gorgeous, by the way), Vietnam Veterans (the wall is sobering), the Washington Monument, and the Lincoln Memorial. And of course, Arlington Cemetery (witness the Changing of the Guard at the Tomb of the Unknowns sometime) and the Holocaust Museum.

I haven't even made it to the Franklin Delano Roosevelt, George Mason, Korean War Veterans, LBJ Memorial Grove, Martin Luther King Jr., Theodore Roosevelt Island, or Thomas Jefferson. So maybe it's time to take another trip of my own!

The history, talking points, lessons, questions and somber silences are as unlimited as your imagination in these places. Consider the sacrifices of "the greatest generation" during World War II, for instance, or the weight on President Lincoln's shoulders as he tried to hold a fractured country together. You could take an entire week to see all the sites and learn all the lessons of our Nation's Capital, but if that's not enough for you, or if your heart and mind need a break, consider making one of these great destinations part of your trip:

A lot of things have happened on this continent since the first landing at Jamestown in 1607. Our history here did not begin with us, and our freedoms did not come without the cost of sacrifice. This Memorial Day weekend, get your family out of the backyard and into the lessons of the past. While you're at it, have a little fun in the present and do some thinking about our future.