21 Kneeling Men - People of the Cross

21 Kneeling Men - People of the Cross

The images are haunting.  So vicious.  So cruel.  21 kneeling men at the merciless hands of violent evil.  A caption in the video called them, "People of the Cross," citing their belief as the reason for their death.

21 men in orange jumpsuits, paraded down a sandy seashore.  These men were husbands, fathers, brothers, and sons.  They each had a name, and they carried His great name within their hearts.  They were Christians, Egyptian Coptic Christians, they were brothers in Christ.  They stood for our Savior in a dark world and it cost them their very lives.  They knelt for His name, knowing that this life was not the end, believing that to be absent in the body was to be immediately with our Lord.  They were willing to let go of all that held them here, set free from the pain and anguish of soul they have journeyed through these recent days.  Orange jumpsuits gone, replaced by robes of white.

As Christians we have hope, because we know they live free.  For evil can kill the body but it can never touch the soul.  Evil has no hold on eternity, it is powerless in the face of the Almighty God.

I believe God’s grace was powerfully bestowed on every man at this moment of great need.

I believe God’s strength was displayed through their spirits that pulsed His very life deep within their souls.

I believe His words called to them as they knelt in the sand, “My thoughts are so numerous for you, if you were to count them they would outnumber the sand…”

I believe they knew they were not alone, not ever alone.

I believe He welcomed them into their heavenly home with words we all long to one day hear, “Well done, my good and faithful servant…Enter into the joy of the Lord…”

21 Kneeling Men held fast to the name of Christ.

21 Kneeling Men were willing to pay a great price.

21 Kneeling Men at the hands of an evil sword.

21 Kneeling Men believed in the power of their Lord.

21 Kneeling Men no longer slaves to this world.

21 Kneeling Men released from all shame and disgrace .

Throughout history, one thing is true.  When the enemy attempts to silence the people of God, it unleashes greater power.  When the onslaught of persecution is great, He is still greater.

What we will never see in edited images from a cruel and twisted ISIS is - what happened when these dear lives were taken?  God’s power is still the same throughout time.  I believe He has and will continue to use even death to bring life.  Did these 21 men have the face of an angel like Stephen as he was stoned?  Did their murderers see light within their eyes?  Did they hear the name of Jesus proclaimed from the lips of these whom they slayed?  Did the winds begin to blow, did the waves of the sea toss and turn, did the skies suddenly begin to darken?   Did the Almighty God strike fear in the stone cold hearts of those who brandished swords, realizing what they had done?  Did he cover the beach in a blanket of dread as the ocean was mixed with the blood of precious souls?

ISIS names their enemy – "The People of the Cross."  They send their chilling message, meant to incite greater fear, meant to instill deep-rooted messages of dread and shame.  May every bit of it - backfire.

May God stir up His people.  May God give greater grace.  May God fill us with a resolute determination that says, “We will not fear you, or your tauntings and disgrace, for we trust in the name of our Lord.”  May God open blind eyes to see things as they really are.  May God set the prisoners and captives free.  May He release those who wander in darkness from the chains that hold them back from His great mercy and love.  May He confuse the plans of the enemy and leave them scattered in disarray.

His Word stands true and here’s what He’s said in the pages of His love letter to us…about suffering…about the cross…about those whose lives are cut short for His honor:

11 Verses to Remind Us, God Sees the Suffering of His People:

“Precious in the sight of the LORD is the death of his faithful servants.” Psa. 116:15

“Blessed are those who are persecuted for righteousness sake, for theirs is the Kingdom of Heaven.” Matt. 5:10

“But even if you should suffer for righteousness' sake, you will be blessed. Have no fear of them, nor be troubled.” 1 Pet. 3:14

“Who shall separate us from the love of Christ? Shall tribulation, or distress, or persecution, or famine, or nakedness, or danger, or sword? As it is written, “For your sake we are being killed all the day long; we are regarded as sheep to be slaughtered.” No, in all these things we are more than conquerors through him who loved us.“ Rom. 8:35-37

“And do not fear those who kill the body but cannot kill the soul. Rather fear him who can destroy both soul and body in hell.” Matt. 10:28

"And they overcame him because of the blood of the Lamb and because of the word of their testimony, and they did not love their life even when faced with death." Rev.12:11

“When he opened the fifth seal, I saw under the altar the souls of those who had been slain for the word of God and for the witness they had borne. They cried out with a loud voice, “O Sovereign Lord, holy and true, how long before you will judge and avenge our blood on those who dwell on the earth?” Rev. 6:9-10

As we reflect on the suffering of the cross over these next days that lead towards the celebration of the resurrection of Christ, may we also remember those who suffer and grieve today.  May we remember what it truly means to be called by His name, may we remember the great price He paid, so that we can live free, and may we remember that someday…

“…at the name of Jesus every knee should bow, in heaven and on earth and under the earth, and every tongue confess that Jesus Christ is Lord, to the glory of God the Father.”  Phil. 2:10-11

"He is no fool who gives what he cannot keep, to gain that which he cannot lose." Jim Elliot

We are the People of the Cross. 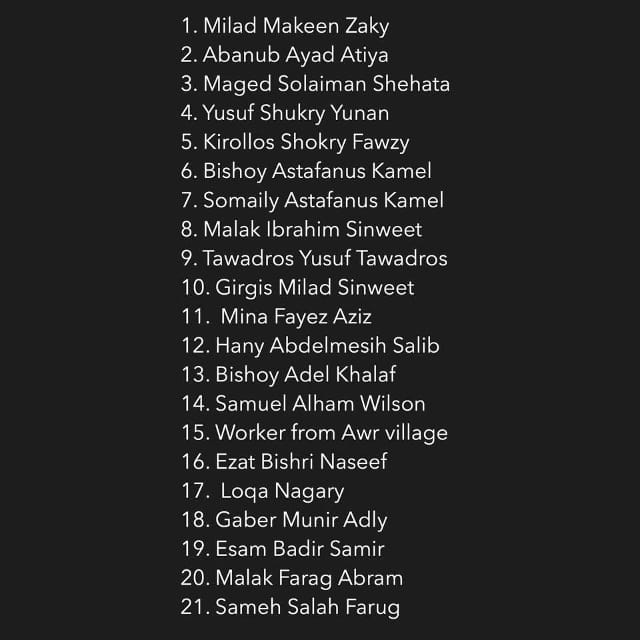