The Thing About Casting Cares: You Have to Let Go

The Thing About Casting Cares: You Have to Let Go

Worries seem to hover thick some days. Like a heavy fog settling over.

Yet God's words can break through the fog and the gray, light streaming straight in to remind us of what is true and real in a world that seems dark. In days that feel uncertain.

'"Cast your cares on the Lord and he will sustain you; he will never let the righteous be shaken." Ps. 55:22

He's the great burden-bearer. The One who sustains us.

And yet even though we know this to be true, how often do we keep carrying all that stuff around - the worries, the uncertainties, the burdens - in our minds, in our hearts...

The thing about "casting cares," is that it requires some action on our part, it has to leave our hands and thoughts, or else we haven't really "cast" it to Him. We're still clutching on. And often really tightly. It's hard sometimes to really give it over to God, when we can't see what He's doing, or we somehow think we might know better.

Casting cares doesn't give room for us to just sit numbly with anxious thoughts spinning. Choosing not to stress over things we can't control is an active choice we must make. It's not about pretending like we don't have worries, ignoring our problems, or living a life of passivity.

It takes some effort on our part...choosing to give God our struggles.

It requires trust on our part...to let go. Remembering that He is in control.

It requires humility on our part...recognizing our need Him, His wisdom, and His work on our behalf. Remembering that life is not all "up to us," but that we are dependent on His goodness and care over us. Understanding that we can't see the big picture like He can.

It starts here, "Humble yourselves, therefore, under God's mighty hand, that he may lift you up in due time." 1 Pet. 5:6

And then this, "Cast (to throw, to fling) all your anxiety (cares, worries) on him, because he cares (shows concern for, watches over affectionately) for you." 1 Pet. 5:7

His Word reminds us to throw "all" of our worries over to Him, every single one. Because He cares. About all that concerns us. And He can handle them all so much better than we can.

Fishermen out on the lake one night. We find them in John 21. Disciples of Jesus, on the night shift. Working hard, but not catching a thing. Morning came, exhausted and defeated, I'm sure they felt a lot like us, when we try so hard, spinning our wheels, yet things don't seem to go our way.

A voice from the shore calls out to them. "Cast your nets on the other side." v. 6 It may have sounded familiar, they've heard this thing before. Another time when they were weary from work, and not catching a thing. Yet they didn't recognize who it was. They were too tired to see.

Thoughts probably filled their weary minds, "Um, yeah whatever, we've worked all night, fish aren't biting here. I'm so done." If you've ever fished for hours and not caught a thing, maybe you relate. Or you put so much effort into working something through, but yet it's not enough. You still feel like you've failed somehow. Or things just aren't ever going your way, when you're trying so hard to do the right thing. Probably the last word you want to hear is for someone to tell you to do it again.

They were tired, and were expert fishermen. They knew what they were doing and didn't need someone else to tell them how it's done. Especially a stranger on the shore.

But something compelled them on. And they followed the command, and they cast their nets, and the Bible says there were so many fish, "they weren't even able to haul it in." v. 6

They knew then. Who it was who called to them. Their Lord and Savior Jesus Christ, the great Burden-bearer, the Miracle-worker, the One who bore our sins and shame, who takes our worry and cares, so we don't have to try to carry it all on our own.

This miracle wouldn't have happened if the disciples didn't have great humility to obey the command. They could have cut things short, responding, "Dude, hey, we know what we're doing, but thanks anyway!"

But with humility and obedience, with trust and effort, they mustered all their strength and cast the nets once more. Those old, worn, well-used ropes left their hands and fell into the deep sea. They let go. And blessings beyond belief came back their way.

God knows everything that concerns us today. And He says to come to Him, and to cast every care His way. He longs to bless us. But maybe sometimes we've been working on the wrong side of the boat. And He reminds us to cast on the other side. Maybe other times He knows how tightly we're clutching on to what we think we know is best, every ounce of control mustered to try to make things work, our way, in our time. And then He says "Let go," so that He's free to work it out better than we ever could. And we can be reminded, again, how much it's not all up to us.

He promises to give peace and rest, He won't ever leave us hanging, left to work things all out on our own. And His blessings, in His time, in His ways, are always much greater than we could ever imagine.

Cast your cares. Cast your efforts. Cast all that concerns you.

And be ready...for our burden-bearing, miracle-working God to overwhelm you with His goodness and grace.

Resting there today. Hope you are too. 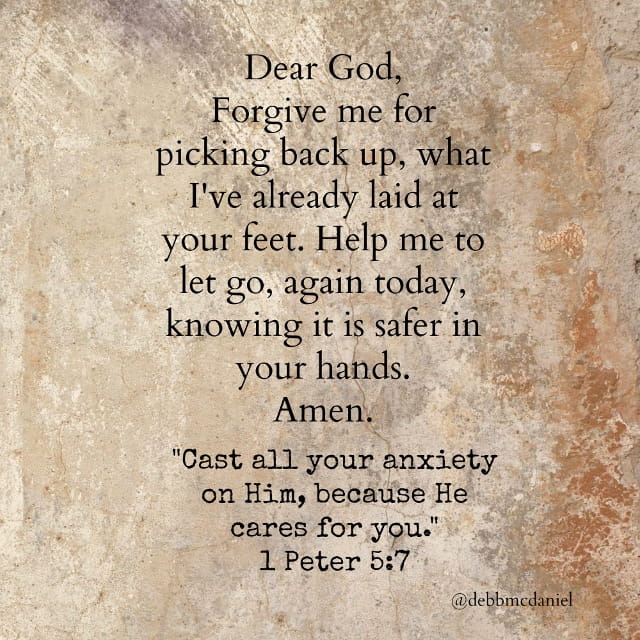 Debbie McDaniel is a writer, pastor's wife, mom to three amazing kids (and a lot of pets). Join her each morning on Fresh Day Ahead's facebook page,http://www.facebook.com/DebbieWebbMcDaniel, for daily encouragement in living strong, free, hope-filled lives. Find her also at http://twitter.com/debbmcdaniel.