Here’s a hard sell: Go into a network TV pitch room and say, “I want to do a show about rural Christians in a church choir.” Chances are slim you’ll walk out with a development deal—yet that’s exactly what Lesley Wake Webster did at NBC Television. The result is Perfect Harmony, a fresh, family-friendly comedy that’s become a surprise success.

The premise for Perfect Harmony is this: “When former Princeton music professor Arthur Cochran unexpectedly stumbles into choir practice at a small-town church, he finds a group of singers that are out of tune in more ways than one. Despite the ultimate clash of sensibilities, Arthur and his newfound cohorts may just be the perfect mix of individuals to help each other reinvent and rediscover a little happiness, just when they all need it most.”

Recently we caught up with Webster during a break on set, and asked her to spill a few secrets with Crosswalk.com readers about her hit show. She was happy to oblige.

Secret # 1: Perfect Harmony Writers are No Strangers to Church or to Choirs

But...what does this “media elite” know about singing in a small-town church choir? Quite a bit actually. “I was hoping you would ask me whether I had sung in a choir!” she says happily. “And the answer is yes. I grew up singing in church choirs and I come from a family of singers, particularly, church singers.”

Additionally, a good percentage of the 12 writers on Perfect Harmony are also church choir veterans. Webster reports, “We have three current, active church members—that’s a big part of their lives. And then we have multiple former church choir singers in various states of faith.” 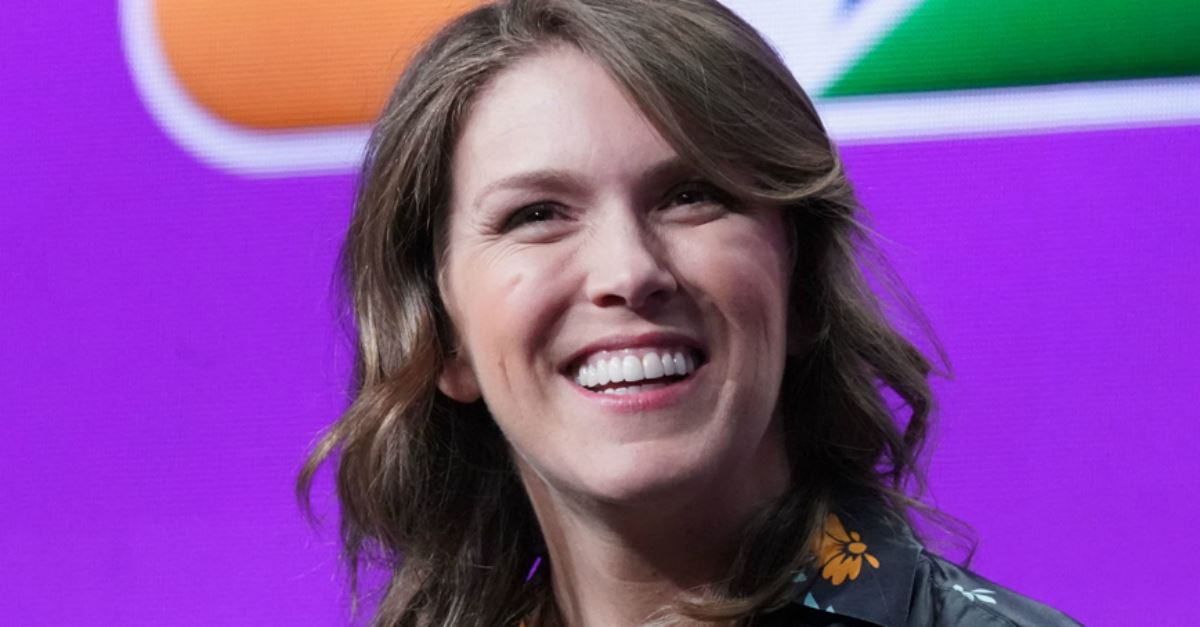 Secret #2: Perfect Harmony was Created by an Agnostic

Ask Lesley Wake Webster if she sings in a choir now, and she’ll tell you the truth. “I don’t anymore. I would currently describe myself as a person of faith as ‘agnostic.’ But I would say that my experience in church choir—my connection to faith and spirituality—I feel like music is a huge part of that. It’s very meaningful to me and I sang from a little wee kid all the way up through being in the Princeton Glee Club. I sang in choirs, and my father has a beautiful voice. He is a lovely tenor. He and my mom are still very active church members.”

Secret # 3: An Agnostic Wanted to Create a Show about—and for—Christians

“Growing up I went to church and I had a very powerful experience in my teenage years.” Webster says. “I was a member of a Southern Baptist church. It was really the defining event of my teenage years—in a great way. It was a place where I found community and identity, and the strength to speak my convictions.”

“I feel like sometimes, right now, church and Christianity is being portrayed as this very narrow, conservative thing. I suppose there are some branches of Christianity that certainly are, but I feel like it’s important that we portray the richness and the vastness of the Christian experience. For me, that was one that was really celebratory, where I felt like I came together with different people.”

Webster adds, “I just feel like there are a lot of people who have an experience with faith, whether they’re current churchgoers or not, and it would be nice for them to see themselves reflected on TV in a way that isn’t just making fun of them.”

Though not a churchgoer at present, Lesley Wake Webster still expresses deep respect for Jesus. “The first word that comes into my mind when you say ‘Jesus’ is forgiveness,” she says.

“The idea of Christ’s love as self-sacrificing, forgiving, absolving. To me that was one of the most powerful lessons of growing up in the church—the idea that there is forgiveness no matter what a person does or says. If they’re seeking to be forgiven for it, there is grace and forgiveness.”

She adds, “I would say now, as I said, I’m agnostic, so my relationship with the Judeo-Christian tradition has changed a little bit. But I still think of Jesus as the epitome of forgiveness and grace, and honestly how we should all treat each other.” 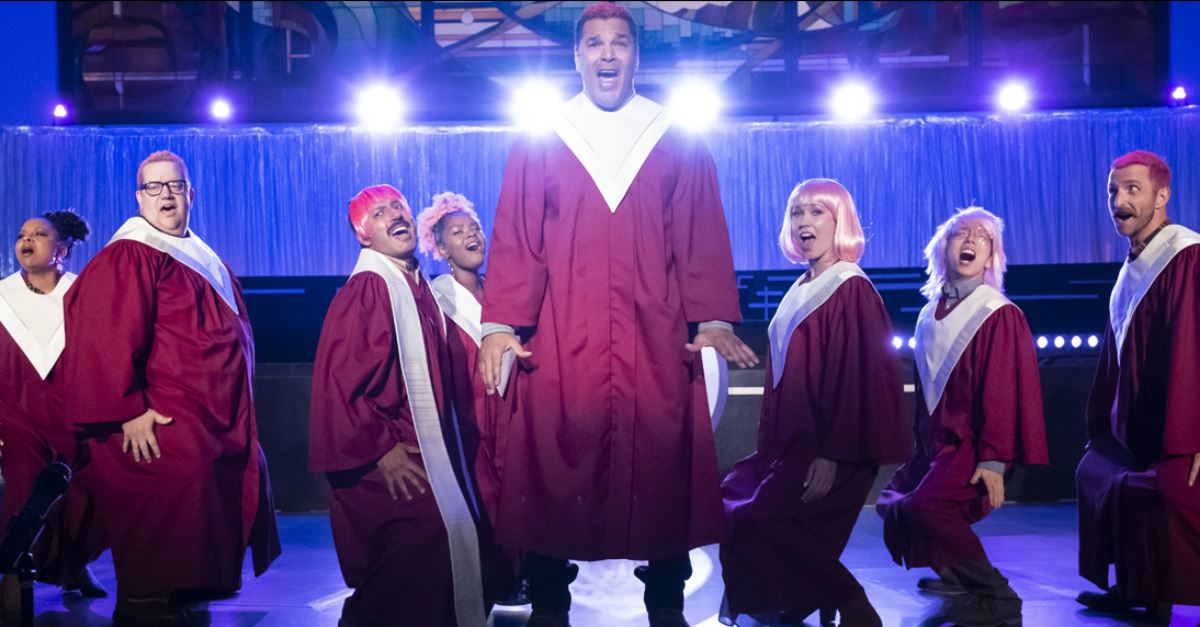 Moving to lighter topics, Webster happily gives a glimpse of what it’s like to work as a writer on her show. “We roll into the writers room about 10:30 a.m., which I know sounds scandalously late! The traffic is so terrible, you either have to start at about 6:00 a.m. or around 10:00 a.m., one way or another, or else you’re just going to sit in rush hour traffic.”

“After that,” she laughs, “we do the very important job of deciding what we’re going to order for lunch, which is no small part of our morning. We actually, just for fun, we have a wheel that we spin to decide who gets to pick the lunch place. That brings a little fun and whimsy into the room.”

Continues Webster, “Then our days are divided between pitching story ideas for upcoming episodes, and rewriting and punching up scripts that are currently in the pipeline … This morning a small group of us were sitting around talking about what’s going to be the story in the finale. How do we see that unfolding? Later this afternoon we will switch over to polishing a script that is the next script to be read. We keep a good amount of variety.”

Then, says Webster, “our day in the writer’s room ends somewhere between 6:00 p.m. and 9:00 p.m. depending on how industrious we’ve been or how far behind we are.”

Secret #6: Lesley Wake Webster is an INFP on the Myers-Briggs Personality Indicator

According to Webster, “I am pretty good at guessing someone’s Myers-Briggs [personality] type!” One might even call it her hidden talent. Webster herself is an “INFP,” which is an inherently creative personality driven by high values and typified as an Idealist and a Mediator.

“INFPs are like, 80% writers,” she laughs, and it’s easy to see how this personality influences her work on Perfect Harmony. She says, “Comedy [is] not only what I want to do for my living, but also...something that is uplifting. It can be a life-changer for people. So even though sometimes it’s very silly to work on a sitcom, I like to think that we’re making the world a little bit easier to bear for people.”

She adds, “When someone tells me, later, that something I said or did helped them through a hard time, that is the most meaningful thing to me.”

Perhaps because she’s an idealist, and a mediator-type, Webster’s final thoughts during our interview are about you, the Crosswalk.com reader.

“I hope it’s not a disappointment to your readers that I am not an active churchgoer,” she says, almost apologetically. “I’m sure that would’ve made a better story. But I felt like I should be honest.”

“I guess I’m currently in the place of feeling like I want to connect with what is great in the world. I believe there is something divine out there, but I think that divinity might show itself to us in more ways than simply the traditional religions, the traditional monotheistic traditions even. So I guess I’m in a place of embracing not knowing, if that makes sense.”

If you’d like to send a note to Lesley Wake Webster and the writers of Perfect Harmony, Webster gives this advice:

“A great way for people to contact me is through the Perfect HarmonyWriters Instagram. Several of our writers actually read it every day, and they will tell me, ‘Hey, you should respond to this.’”

Mike Nappa is an entertainment journalist at PopFam.comand a features writer for Crosswalk.com. He’s also a bestselling and award-winning Christian author with more than a million copies of his books sold worldwide. Learn more about Mikey at Nappaland.com and MikeNappa.com.