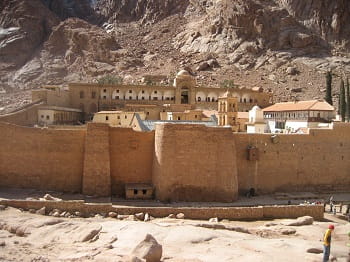 After taking the flight from Dubai to Cairo, from Cairo to Sharm El Sheik, and then the 2½ hour drive into the barren Sinai Desert surrounded by equally barren and rugged hills, my one thought made me feel guilty: If the Israelites wandered 40 years in this, no wonder they grumbled.

But with a destination like St. Catherine’s Monastery, it was worth every effort.

(No one should take this trip today…the danger is ridiculous. I shouldn’t have done it myself at the time. I hope and pray for the time it will be safe for any pilgrim.)

There is no other place on the planet you can visit that transports you so far back into redemptive history. For here we have the place where, second only to the incarnation, God made Himself most clearly known. First through a burning bush on the side of a mountain, and then later, descending in power and glory on to the top of the mountain, writing His very law onto stone tablets for humankind.

The construction of St. Catherine’s was commissioned by the Byzantine emperor Justinian in 530, though Christians had been coming there to escape persecution, or as anchorites in pursuit of a monastic life, since the 300s. It was built as a result of its proximity to Mt. Sinai, but also to protect both Christians in the area as well as what is purported to be the bush that drew Moses to his first encounter with the living God.

It is very much like a castle, with high walls and a fortress-like appearance. Mt. Sinai itself is just behind the side of the mountain on which St. Catherine’s is built, reached by a winding trail to the left and behind the monastery. The trail to the top is often taken by pilgrims at hours of the day that allow reaching the top by sunrise or sunset. Local Bedouins eagerly offer camel rides to those less inclined to make the long walk, particularly the final 3,750 Steps of Repentance carved by monks.

The famed bush, whether the actual one or not, is certainly there. It lies within the oldest part of the monastery in a small, roped-off courtyard at the end of a narrow walkway. Intriguingly, it appears dead on the bottom, but alive on top. It looks something like a large hanging plant. I’ve been told that its age has been determined to be in the hundreds of years, and that no cutting from it will take root.

I won’t comment on the bright red fire extinguisher in the corner. (I kid you not – there was one there.)

The oldest and most sacred part of the monastery is the small chapel built next to the bush, the Chapel of the Burning Bush, which dates from the 4th century. It is filled with icons (it is, after all, an Orthodox monastery) and hanging candle lamps with ostrich eggs on top.

I’ve never seen anything quite like them; they are truly beautiful.

St. Catherine’s is also home to an incredible library, closed to the public, but second only to the Vatican in terms of treasures and ancient manuscripts, particularly iconography. While I was there, I was able to see on display two of its treasures: the “Christ Pantokrator” from the first half of the 5th century, which I think you would recognize if you saw it. It is the classic picture of Christ that dominates ancient Christianity and, to this day, Orthodox faith. 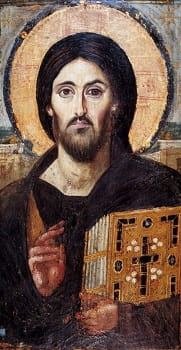 I also saw part of the “codex sinaiticus,” which dates from the mid-4th century, among the oldest manuscripts of the Bible and the source for modern translations to this day. The one I viewed is thought to be one of 50 sent to Constantine, who likely donated it to the monastery upon its founding. The original codex, considered at the time to be the only copy, was taken by the Russian entrepreneur Tischendorf in 1844 and 1849 under dubious pretenses through trusting monks, who then sold it to the British Library in London where it remains to this day.

Certain folios were found later by the monks, but needless to say, they continue to want their codex back.

You may wonder how St. Catherine’s has survived with all of its treasures, particularly as a Christian stronghold in the midst of the heart of Islam. Thank Mohammed himself. The monastery is protected by the “Patent of Mohammed” which Mohammed granted to the monks in 623, giving it rights and privileges in perpetuity. A copy of the patent still hangs prominently in the monastery.

Why do I want to introduce you to St. Catherine’s, besides its tie to the deepest of biblical past? It’s because St. Catherine’s reminds us that there is a God, and He has not been silent. He has been making Himself known from the very beginning.

Your God is the God of Moses.

Your God is the God of Sinai.

Your God is the God of the burning bush.

Your God is the God of everything, and everyone, you read of in the Bible, which means He is the God who desires nothing more than to make Himself known.

You can hear from God, which means you can be led by God,

…and living the life you long for, and that God longs for you, depends on it.