Do all those picture perfect moments on social media ever leave you feeling like your own life isn’t good enough? Well, you’re not alone. Joanna Gaines talks social media in the Spring 2019 issue of The Magnolia Journal. And she admits to battling the same feelings of insecurity as the rest of us!

Social media can be a great way to keep up with friends and family. But you have to be careful. It can also start to impact your real life in some not-so-healthy ways. And that’s true for all of us, even former “Fixer Upper” star Joanna Gaines.

Before HGTV launched Chip and Joanna Gaines into the spotlight, Joanna didn’t put much thought into her social media presence.

“It wasn’t so very long ago that I had only a handful of followers on Instagram,” Joanna recalled in The Magnolia Journal. “There wasn’t any pressure to post anything at all, so whenever I did, it didn’t really cross my mind whether or not people would ‘like’ it.”

But after hitting official “celeb” status, suddenly Joanna’s posts were under a new level of scrutiny. She now has millions of followers. So even the most innocent post can sometimes bring an unexpected onslaught of criticism. Like the time a simple photo of Baby Crew at the doctor brought on a huge vaccination debate (read about it HERE).

Suddenly, Joanna found herself becoming more preoccupied with what and how to post on social media.

“I could feel insecurity start to creep in, and posting a photo was no longer an act of enjoying the in-the-moments of life but rather a more calculated decision,” she said. “With every picture I found myself critiquing if there were messy backgrounds or blurry smiles.”

Joanna Gaines is a mom to five children: three boys — Drake (13), Duke (9), and Crew (7 months) — and two daughters — Emmie (8) and Ella (12). And like most moms, she likes to capture those special family moments on camera and sometimes share them online.

But she started to realize the pressure of trying to be “perfect” on social media was beginning to steal her joy.

“I think this is how we can end up losing sight of what is worthy of sharing and what is even more worthy than that - moments worth simply experiencing,” Joanna said. “Eventually, I realized that I was letting this small square on my phone become yet another thing to perfect.” 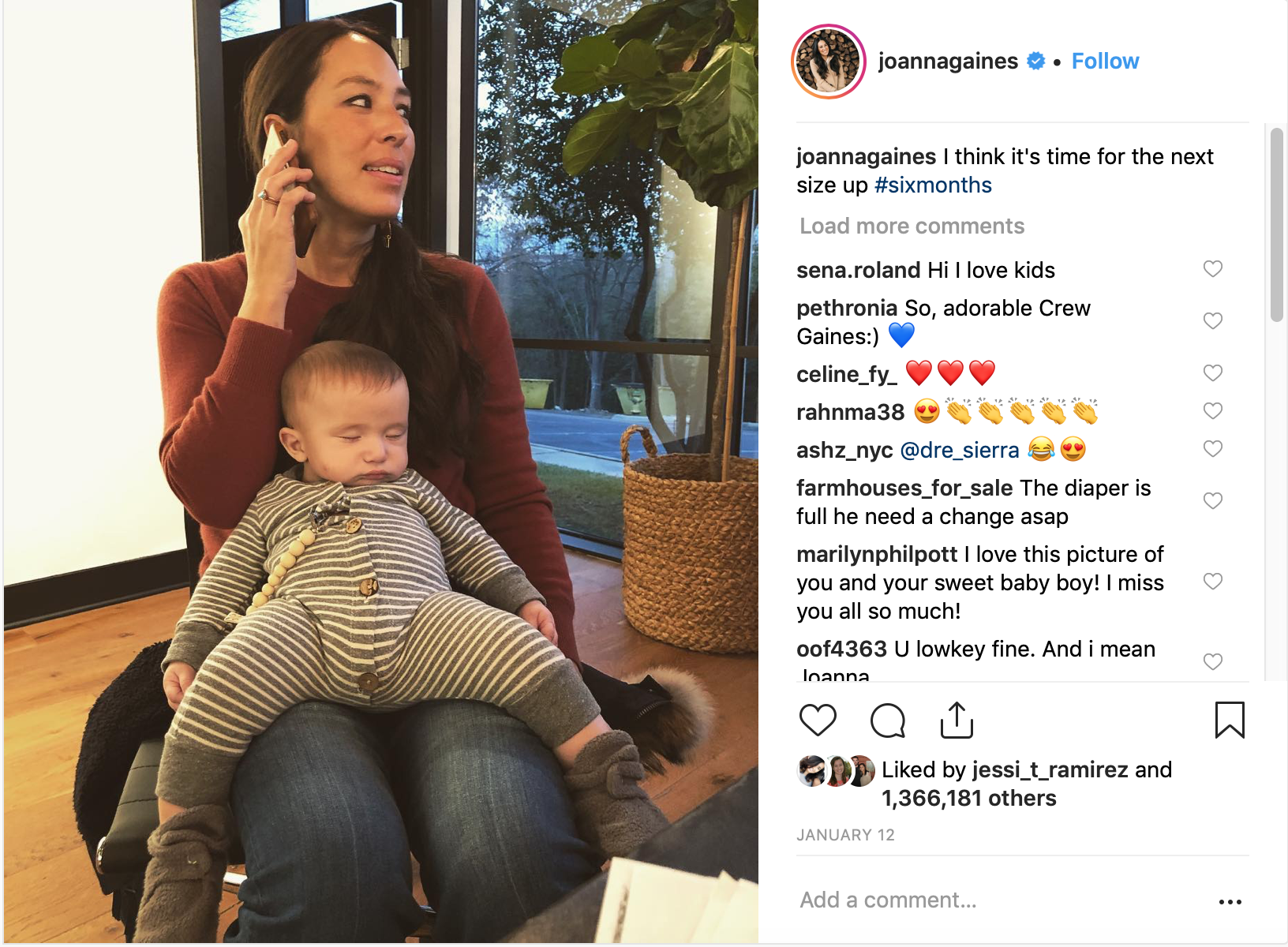 That’s when Joanna took a step back. And when she did, the down-to-earth mom recognized the truth.

“It is so easy to let social media rob us of authentic moments,” Joanna Gaines said. “And what happens when we don’t think our ‘real life’ looks as good as someone else’s? We make adjustments - find better lighting, dress our kids in something nicer, place a vase of fresh flowers in the background, or add the perfect filter.”

Once Joanna realized what a negative distraction social media was becoming, she set limits for herself.

“[I am] mindful of when the red flags of comparison or anxiety begin to move in,” she said. “They kindly remind me that something in my own heart or mind is a bit out of sorts. My best next step is to stop scrolling and put my phone away.”

That kind of self-regulation isn’t always easy. But it’s crucial to finding peace and not getting too caught up in this world.

“I’m a firm believer that how we spend our minutes can become the way we spend our life,” Joanna wrote in The Magnolia Journal.

That doesn’t mean Joanna has stopped snapping photos of her precious family. Or sharing them for that matter. In fact, she admits her camera roll is still chocked full of photos of her kids and daily life.

But now, she’s careful to be present in the moment rather than to get caught up in staging the perfect picture. Maybe it makes it to social media, maybe it doesn’t.

As Joanna Gaines talks social media, she makes some great points that remind us of what really matters. Sometimes, as we scroll through our news feed, we can’t help but play the comparison game.

But what we’re seeing on social media is highlight reels. They are the selected “best” moments, with careful edits and filters to make them even better. That’s not reality.

You can spend all your time worrying about appearances, trying to get things “just right.” But that’s not the life God designed for us. He made you to be you.

And as Joanna Gaines points out, both on the cover of The Magnolia Journal Spring 2019 issue and in the Magnolia Market decor, “The world needs who you were made to be.” 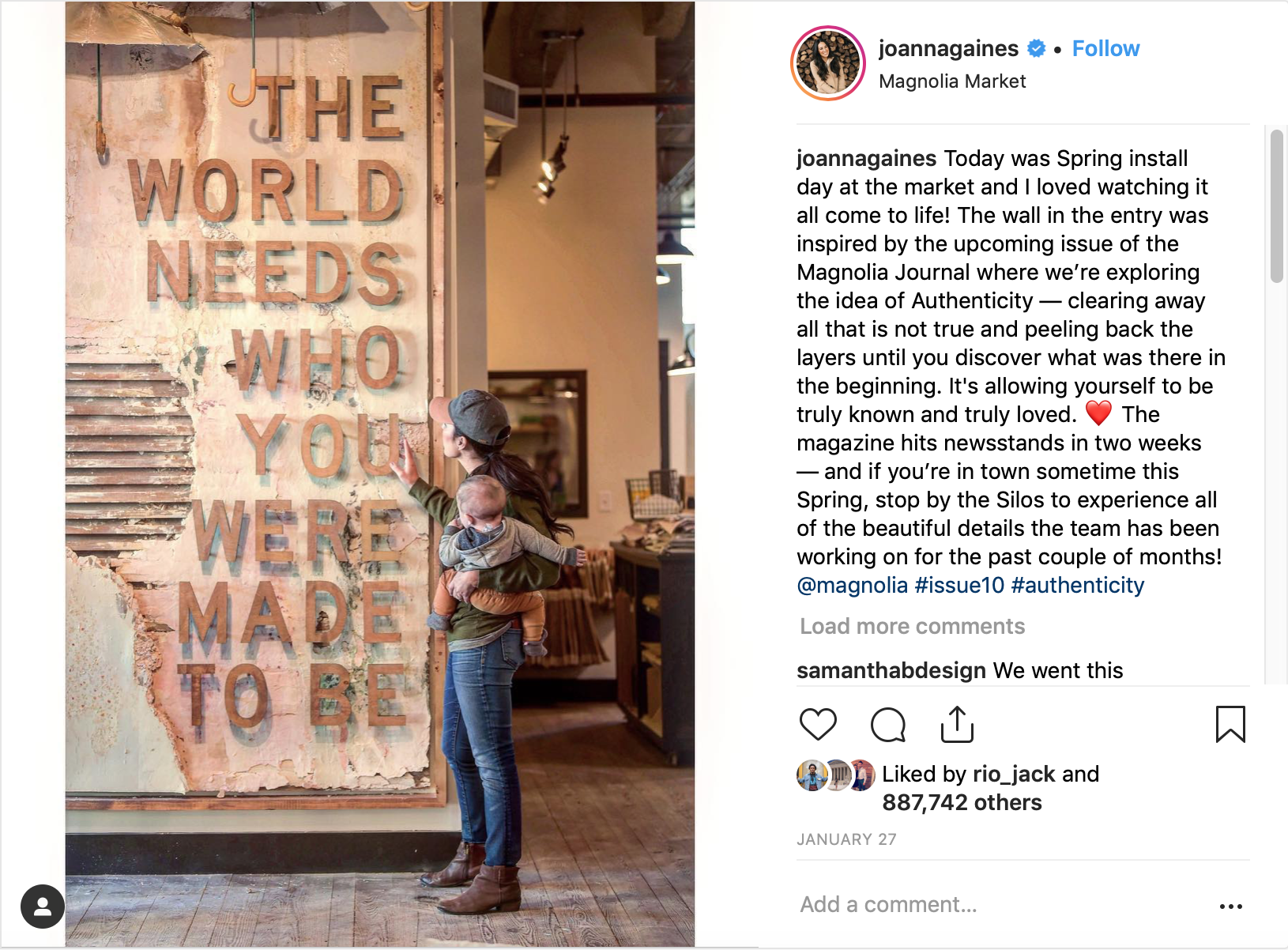