The sparrow is sorry for the peacock at the burden of its tail. – Amitendranath Tagore

Back in the day, during times of conflict, I learned to compromise. Today, I know that’s not always the best thing to do. Sure, not every mountain is worth dying on – but some are. When it comes to the law and faith, I believe it’s worth a fight.

The Jewish people rightfully loved the law. Many of them still do. In its earliest form, the law was a love letter – the evidence of betrothal between God and Israel. Since its conception, the law of Moses has defined the national identity of the Jewish people.

So what happened when the Jews of the early church encountered grace?

Paul, though he had been a high-ranking, devout Jew, rejected the compromise of law and grace, knowing they were like oil and water. Yes, he knew the laws of Moses had a specific purpose. But he knew that purpose ended with Jesus:

So the law was our guardian until Christ came that we might be justified by faith. Now that this faith has come, we are no longer under a guardian. (Galatians 3:24-25)

The love of the law continues in the Jewish community today. In fact, it’s customary for the Torah – scrolls of the law – to be carried around during a coming-of-age ceremony. I heard a story once of a man who came forward to carry the scroll and, as they placed the Law upon his shoulders, his knees buckled under the weight. I looked it up and these scrolls can weigh as much as 50 pounds.

More importantly, the “weight of the law” can crush any believer who attempts to fulfill the law rather than walk by faith.

How about you? Are you carrying the weight of the law in your own strength? Have man-made standards and religious rules brought you down yet? Or has self-righteousness clouded your thinking, deceiving you into thinking you are “okay” because of your self-effort? If so, it’s time to let it go... today.

Giver of All Good Gifts, You gave the law knowing its most beautiful day would be the day it led me to Christ – Christ in me – the same Christ who promised a light burden. My weary knees buckle under all kinds of law. Erase the love I have for my own efforts, and write grace and faith upon all I think and do. Amen. 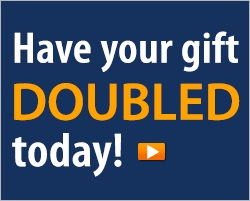 Have your gift DOUBLED today!

A group of generous friends has stepped forward with a $35,000 Matching Grant – which will DOUBLE any gift you give today! As a thank you for your gift, we’ll send you Stuart Briscoe’s new 3-message teaching series, Finding Healing, to help you experience God’s healing power in your life.