Which Religious Type Are You?

You get the sense that some studies are just fun for those doing them. Either because they know they are on to something, or it’s a groundbreaker. I think this study was both. The Pew Research Center (a favorite of mine) decided to categorize Americans by religion.

But not by denomination or church.

Here’s how they did it: 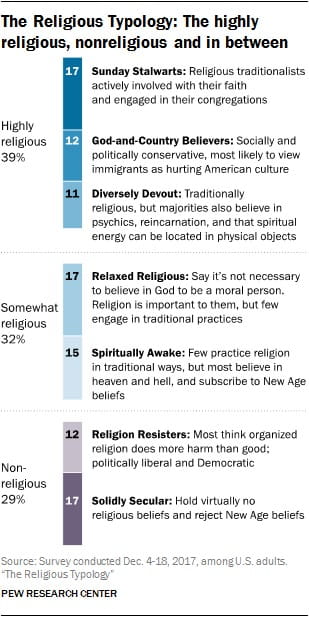 Instead of going with Catholics or Baptists, Methodists or Muslims, they went straight for the spiritual jugular. Pew sought out what people actually believe and how they actually behave.

Sunday Stalwarts are the most religious group. They actively practice their faith and are deeply involved in their religious organizations. Rumor has it they also eat at Chick-fil-A. God-and-Country Believers are less active, but hold many traditional religious beliefs and tilt right on social and political issues. You might meet one in Alabama. The Diversely Devout? In large part they reflect racial and ethnic minorities, and those who say they believe not only in God but also in psychics, reincarnation and spiritual energy located in physical things. They probably also watch Oprah.

On the other side of the scale are the Solidly Secular who are the least religious of the seven types. They are affluent, highly educated, white, male and believe in… well, nothing. They also all live in San Francisco. Okay, I just made that up but…

The Religion Resisters are slightly different. They believe in a higher power or spiritual force – they are the “spiritual but not religious” crowd – and they hate organized religion. They are generally liberal and Democratic in their political views. They all live in Washington, D.C. I did not make that up.

So who’s in the middle? Seven-in-ten Americans are Relaxed Religious, which means they believe in the God of the Bible and four-in-ten pray daily. But that’s about it. Few attend religious services or read the Bible and, almost to a person, say that it is not necessary to believe in God to be a moral person.

Then there are the Spiritually Awake who hold at least some New Age beliefs and believe in God or some higher power, though many do not believe in the biblical God and relatively few attend religious services on a weekly basis.

I think this is a very healthy and helpful breakdown.

What it isn’t is a very healthy and helpful state of affairs.