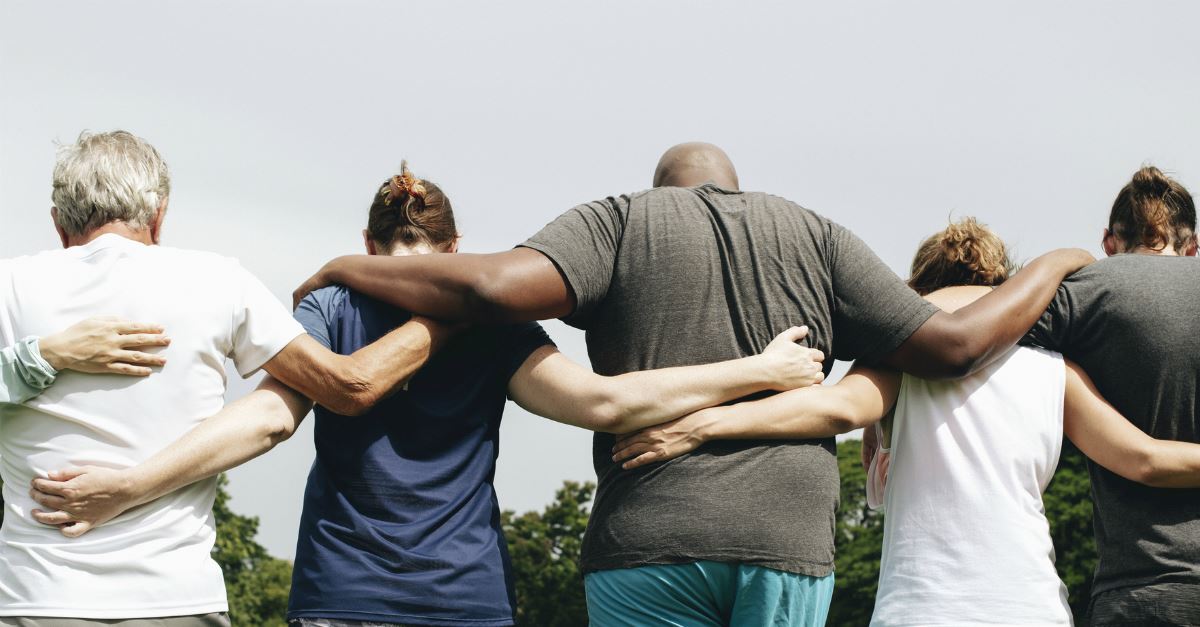 Shalom is commonly understood to mean “peace” or “health” or “prosperity.” It carries within it the idea of completeness. Cornelius Plantinga writes that the word shalom is “the webbing together of God, humans, and all creation in justice, fulfillment and delight.” Shalom is the vision of community; it is what community strives to be.

It reminds me of something I once read about Mother Teresa. When asked how she could give so much of herself to the poor, she would always say that when she looked at them, she saw Jesus in a distressing disguise. That is the heart of authentic community—being Jesus to others and seeing Jesus in others. If you’re married, you are to be interacting with our spouse as if unto Him. If you’re a child, you’re obeying as if unto Him. If an employee, you’re working as if working for Him. And the reverse is true: you’re parenting as if you’re parenting for Him; you’re leading others as if you’re leading for Him.

Even more radical is what such shalom is built on. Namely, grace. Grace, at its heart, is getting what you don’t deserve and not getting what you do. Grace is the essence of any successful relationship—grace toward other people’s differences, weaknesses and sins.

You know the stages. You’ve lived with them your whole life.

The first stage is usually some kind of general attraction.

Not many people instantly hit you wrong. Usually there is something there that’s likable, or at least you’re openly neutral. So stage one is extending a general welcome to the relationship.

But you know what that stage is almost always followed by?

You start by viewing someone from a relational distance. All you have are short, quick interactions that haven’t been subjected to the test of time. But once you get to know someone beyond that level, you start to see their dark side. And they will have a dark side. They will have weaknesses. Differences. Sins. Now our tendency is to let the second stage of disappointment be the defining stage in our relationship with someone. Sometimes it’s called for, like when you find out that someone’s dark side is too strong to deal with, or you realize you’ve got an unsafe person on your hands, or that what you thought was chemistry turns out to be an allergy. Then it’s okay to let this stage be a wake-up call.

But a lot of the time, the differences that we often let end a relationship are trivial and we just don’t extend the grace or maturity to let the relationship go through the necessary – yes, inevitable – disappointment stage. But if you don’t work through it, you will never move on to the third stage, which is where real community begins to take place.

And that third stage is acceptance.

This is when you work through the disappointments, you do the labor of extending grace and understanding, and from that allow yourself to come to a healthy understanding of someone’s strengths and weaknesses. Then you accept them on those terms. The Bible specifically challenges us on this. In the book of Romans, it says, “Accept one another, then, just as Christ accepted you” (Romans 15:7, NIV). If you’re not able to do this, you will never have meaningful relationships in your life.

If you are unable or unwilling to move into the stage of acceptance, then you will be a very lonely and isolated person. No human on earth is free of things that might disappoint you. If you don’t believe this, you’ll just go from person to person, relationship to relationship, and never have any of them move into real community. But if you’ll journey through the second stage and into the third, then you can move into the fourth stage.

The fourth stage is appreciation.

This is getting back to what you found attractive about the person to begin with, and enjoying all that is good and wonderful about them. It’s almost like a return to the first stage, but with wisdom and insight. If the first stage is like a first date, the fourth stage is like seeing a couple celebrating their 50th wedding anniversary, and you see the look in their eyes toward each other—the deep, mature sense of love they share.

And it’s a beautiful thing.

Is there anything more? Yes.

Intimacy: a fifth stage where you can love and be loved, serve and be served, celebrate and be celebrated, know and be known.

So do you see how the work of commitment is key?

Too many of us have a brightly illuminated “EXIT” sign over every relationship in our life—where we work, where we live, where we go to church, even in our marriages. As long as we hang that sign over the door of our community life, we won’t do the work of commitment that is needed to experience the community we long for. The secret of the best friendships, the best marriages, the best job situations and churches and neighborhoods, is that they’ve taken down the exit signs. And when there is no exit sign, you can only do one thing: whatever it takes for the relationship to flourish.

I recently read of a family who brought home a 12-year-old boy named Roger whose parents had died of a drug overdose. There was no one to care for him, so the parents of this family decided they would raise him as if he were one of their own sons. At first, it was difficult for Roger. This was the first environment he had ever lived in that was free from heroin-addicted adults.

As a result of the culture-shock, every day – and several times during the day – Roger’s new mom or dad would say, “No, Roger, that’s not how we behave in this family.” Or “No, Roger, you don’t have to scream or fight or hurt other people to get what you want.” Or “Roger, we expect you to show respect in this family.”

In time, Roger began to change.

For so many of us, community – particularly the new community that the Bible calls us to – demands new behavior. The death of old practices and the birth of new ones. We’re like the boy, adopted into a new family, needing to relearn how to interact with people.

But here’s the good news: when we hear the Holy Spirit say to us, “No, that’s not how we act in this family,” we can say, “You’re right. It’s not.”

And change. And begin to have the relationships with others we want as part of the new community God desires for us to experience.

James Emery White, A Traveler’s Guide to the Kingdom. Get the eBook on Church & Culture HERE.

Cornelius Plantinga, Not the Way It’s Supposed to Be: A Breviary of Sin.

“How God’s Children Change,” Preaching Today, cited from Craig Barnes from sermon, “The Blessed Trinity,” May 30, 1999.