If you are just dialing in to this series of blogs, I can’t stress enough the importance of reading the first four installments, ideally in sequence.

As noted in this series, the idea of being “Evangelical,” flowing from the Reformation through the 18th-century revivals, emerging in its contemporary manifestation as a reaction to earlier Fundamentalism, is both theological and sociocultural.

Dartmouth College religion professor Randall Balmer would argue that a shift has taken place, beginning as early as 1980 with the presidency of Ronald Reagan, that has made it less theological than ideological, less sociocultural than political. In a recent interview tied to his latest book, Balmer – himself the son of an Evangelical pastor and graduate of an Evangelical seminary – said:

The term “Evangelical” has been stripped of all meaning, with the politicalization of the movement. This is a movement in which I was reared. It’s part of my DNA. I’m very proud of its history going back to the 19th century. The movement I see today is unrecognizable… I don’t see anything that is consonant with the noble legacy of 19th century evangelical actors…. Evangelicals didn’t always get it right. But if you look at their overall record, it was remarkable.

I read this and resonated with it. At the same time, a telling survey from Pew was released. The title was “More White Americans adopted than shed evangelical label during Trump presidency, especially his supporters.” Trump always had support from White evangelical Protestants. In 2016, 81% from that grouping voted for him. But what has the impact been of this political alliance? Did it result in an exodus from the movement on the part of those who were evangelical and did not support Trump? If so, would it leave behind a smaller number of evangelicals, or would Trump supporters “convert” and become evangelicals to compensate?

Now we know the answers to those questions.

There has been no large-scale departure from evangelicalism among White Americans. “In fact,” the Pew survey found, “there is solid evidence that White Americans who viewed Trump favorably and did not identify as evangelicals in 2016 were much more likely than White Trump skeptics to begin identifying as born-again or evangelical Protestants by 2020.”

But this does not reflect the power of a Trump rally to bring people to Jesus. Instead, it reflects the growing conflation of the Republican Party, or at least the conflation of certain political convictions and ideologies, with the term “Evangelical.” Or more to the point, being an Evangelical to many means less about theology, or sociocultural ties with various evangelical institutions, than it does ideology. 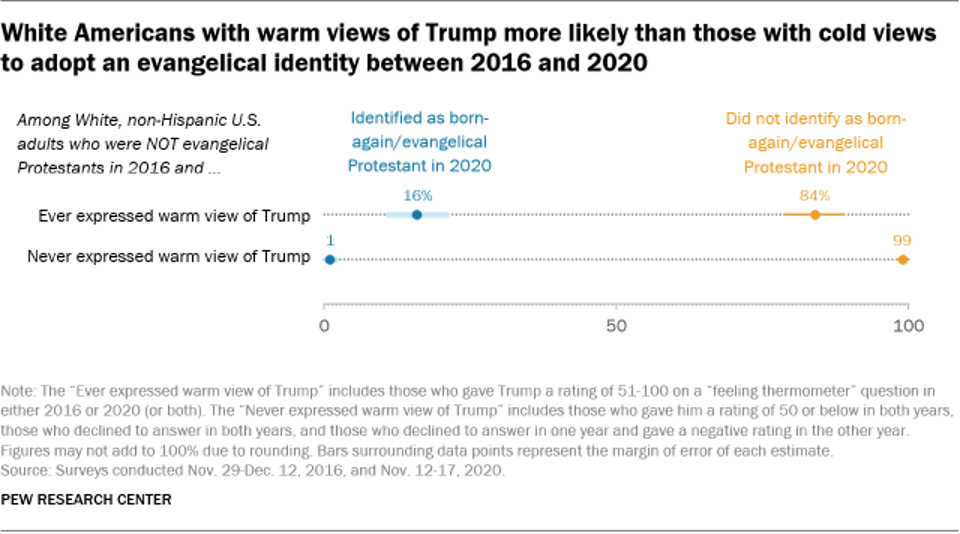 I’ve been observing this throughout the pandemic. People will leave a church, or begin attending one, on the basis of whether it meets their ideological stance on masking, vaccines, opening vs. closing, and racial issues (e.g., Critical Race Theory). Not whether the church is theologically sound, but ideologically aligned. Almost overnight, the term “Evangelical” conveys, in the minds of many, to have voted for Trump and to stand for certain things culturally.

Let me be clear. What I am saying isn’t intended to convey an anti-Trump (or pro-Trump) stance. It has nothing to do with what political or ideological stances are right and which are wrong. That’s why reading this particular blog series in order is critical. This is about what it means to be an Evangelical, and how the term is being seized in ways that have nothing to do with its history, theological moorings or previous sociocultural dynamic. It’s about how, now, the term “Evangelical” has become almost entirely associated with politics and ideology.

The reporting of Christianity Today on this was telling and is worth quoting at length:

To historian Thomas Kidd, the possibility that Americans began calling themselves evangelical simply because they backed President Trump “should be of concern to all pastors and committed churchgoers.”

His 2019 book Who Is an Evangelical?: The History of a Movement in Crisis argues that the popular connotation that evangelicals are White Republicans – or White Republican Trump supporters – fails to capture the historic and current breadth of the movement. It was released in the midst of a renewed debate over the evangelical label following the 2016 election.

“There are good reasons for churches to continue to describe themselves as ‘evangelical,’ if by that term they are referencing their historic commitment to the Bible’s authority, the necessity of spiritual conversion, and the felt presence of God in daily life,” Kidd said this week.

“But pastors in particular should realize that the meaning they attach to evangelical may not be the same as that of some in their congregation. I suspect most pastors would not want to inadvertently signal to their congregations that they are effectively branch offices of Donald Trump’s GOP, simply by making undefined use of the term evangelical.”

While many evangelicals and evangelical institutions see their movement in theological terms, to the point that Christian pollsters have tried to break out evangelicals by belief rather than self-identity, the label has taken on a political dimension over decades of polling, media coverage, and the partisan involvement of evangelicals themselves.

“But what if a gap between what we claim to be and what we support politically emerges? The Trump administration raised these questions in new and unusual ways,” said Mark Caleb Smith, director of the Center for Political Studies at Cedarville University. “If the Pew study holds up, and is confirmed by other data sources, it presents the challenge in a new light. Is it possible that people not within the religious tradition of evangelicalism are only ‘political evangelicals’? Does this reflect poorly on us?”

Smith at Cedarville says the social and political overtones to evangelicalism in America may be unavoidable, which becomes a challenge if they interfere with the mission of the church.

“My concern is that this shift might make it more difficult to present ourselves as ambassadors for Christ. Will those who disagree with our politics dismiss us theologically out of hand? If so, this presents real problems for who we are,” he said. “The Great Commission still beckons us, but our culture is so politicized and polarized that spreading the gospel under what is seen as a political banner becomes much harder.”

So I end this series wanting to say two things. First, I have been proud to consider myself a classic, historic Evangelical. And in that sense of the word, I continue to be. I only wish that the term, as understood and used in our world, was less political and more tied to those original moorings.

Which leads to the second thing I want to say. If the term “Evangelical” increasingly means in the minds of our world a certain set of politics instead of a certain set of theological and spiritual convictions that transcend politics, then I will have to find a new identifying label.

As in “biblical Christian who stands in the stream of historic Christian orthodoxy.”

And who really liked Billy Graham.

James Emery White is the founding and senior pastor of Mecklenburg Community Church in Charlotte, NC, and the ranked adjunct professor of theology and culture at Gordon-Conwell Theological Seminary, where he also served as their fourth president. His latest book After “I Believe” is now available on Amazon or your favorite bookseller. To enjoy a free subscription to the Church & Culture blog, visit ChurchAndCulture.org, where you can view past blogs in our archive and read the latest church and culture news from around the world. Follow Dr. White on Twitter, Facebook and Instagram @JamesEmeryWhite.