<< A Different Perspective, with Berni Dymet

These days you drive down the street and you're confronted with so many signs: one way, don't turn here, stop, go, fast or slow.

There's a time where Jesus has been going out doing so many miracles - He's healed people, He fed thousands from a few fishes and loaves, He's cast out demons, He's walked on water…..people called them signs.

And they were a bit like those street signs - you just couldn't miss them.

And then, then one day, the religious leaders come and ask Him for a sign. Now clearly, He has the power to do something that'll blow their socks off - doesn't He.

Instead, He walks away in disgust.

Because - well, He's God. He touches people and does miracles and all that stuff on his terms, not ours.  They wanted Him to be some performing poodle I think. That's what happens when you spell God the wrong way round - you get - dog.

It's like we want to remake Him in our image.

Wake up. God doesn't dance to anyone else's tune. 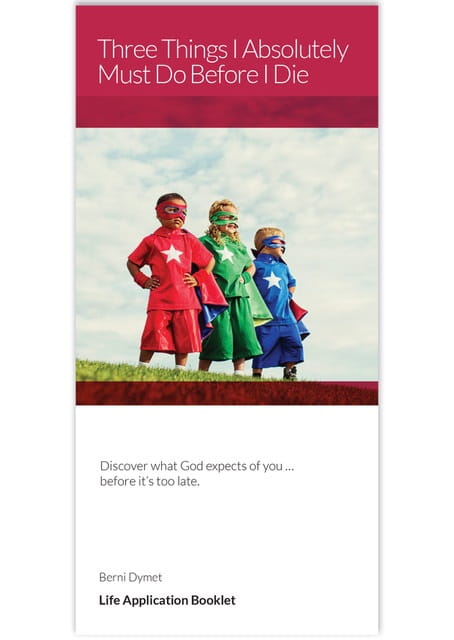 Here’s a vital question for you to consider: If you died tonight, would you be ready for eternity? Now, many people know that it’s all about having a simple faith in Jesus Christ. Nothing more, nothing less. But … do you have the sort of faith that Jesus talked about? To help you answer that question for sure, that’s what our latest Life Application Booklet is all about: Three Things I Absolutely Must Do Before I Die. We would absolutely love to send you your very own FREE copy to help you make sure that you have the right answer, to the most important question of all.