So I wait for you like a lonely house, till you will see me again and live in me. Till then my windows ache. – Pablo Neruda, 100 Love Sonnets

If I saw a man getting mugged at gunpoint but didn’t do anything, I’d miss the opportunity to be heroic. But who would blame me for avoiding harm? And, hey, I called the cops.

However, if a police officer waited to intervene, we’d be a bit perplexed, right? After all, the officer has the power to stop injustice.

“Some faced jeers and flogging, and even chains and imprisonment. They were put to death by stoning; they were sawed in two; they were killed by the sword...” - (Hebrews 11:36-37)

These horrific things happened to God’s people. And if you’re like me, you read this and find yourself wondering, How could God be present with His children but not intervene on their behalf? Who exactly is in charge here?

Deuteronomy 32:8 says, “When the Most High gave the nations their inheritance, when he divided all mankind, he set up boundaries for the peoples according to the number of the sons of Israel.” It was a common belief that battles raged between fallen angels and God’s angels, and the prize was earthly territory. How much governance do angels have? Some degree. We don’t know much more than that.

We also know that mankind was given authority over creation. This is rooted in Genesis, when God told Adam and Eve to rule over and care for all He has made.

If angels and mankind are exercising a degree of authority over earth, then what of Jesus? He sits at the right hand of God – a position of power – and yet persecution happens. Is He in complete control or partial control?

He is in complete control, and some of His control has been delegated to others … “until.” Persecution continues because Jesus chooses to wait before intervening. But the waiting isn’t cruel; it’s rooted in God’s love. To know Him more, we must understand the reason Jesus waits.

Lord, I admit it sounds unloving of You to stand by while Your children suffer. My limited understanding wants to know how You can watch and not stop it? Show me Your wisdom in the waiting. I’m here and You indwell me. Empower me to do what can be done in this period of “until.” Amen. 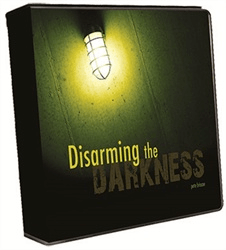 Satan loves to use Christians as his punching bag. But if you’re a believer, you don’t have to fear his attacks and can walk in freedom! Learn more about Satan’s defeat and your triumph in Christ in this encouraging 7-message CD or DVD series from Pete Briscoe.